A while back LinkedIn and TNS conducted a survey research to find out how social media is driving growth for small and medium businesses. The outcome of the research applies not just to SMBs but startup and fortune companies as well. It’s not surprising to learn that SMBs are continually leveraging upon the available digital channels to enhance productivity and fuel growth. As a matter of fact, 8 in 10 SMB uses social media. Seventy-two percent(72%) of hyper growth businesses report an increased spend on social media over last year, more than any other marketing channel. With statistics like above, the report was worth investing a time. Let’s take a sneak peak at some of the insights from the paper and try to read between and behind lines.

In case you have slightest of assumption about the Godspeed attained by social media as being a fluke fad then it’s time to visualize the silver bullet. Social media is enabling SMBs to break through the growth status quo; 61% of SMBs have found social media useful in gaining new customers. But, growth doesn’t happen in isolation. 49% of companies leverage social media to learn, either from their own peers, experts, or partners. But, that’s still the tip of iceberg. In case you’ve any doubt about its financial feasibility then the following stat should help. An impressive 37% of SMBs, who use social media in both the discovery and consideration phase, were driven to purchase a financial product.

While social media is usually understood as a marketing gimmick, we have always communicated it as an inevitable modus-operandi for tomorrow’s business model. This becomes more evident from the fact that while 94% of SMB leverage it for marketing, nearly half also use it for learning and deriving business insights. Also, 81% of SMBs currently use social media to derive business growth and 9% are planning to use it in future.

A key takeaway is a prime opportunity for financial companies that the social media presents, especially Linked-In. Few of the findings are as follows:

The fact that social media use is growing is known to everyone. But, the acceptance that social media does provides ROI and is a strong sales enabler is what differentiates a successful business from others. Another advantage of adopting social media lies in its ability to provide real-time insights. The insights itself could be utilized to iterate the plan, strategy, or model.

Social media spending has always been a debatable issue between new and old school knowledge leaders. But, not any longer. The statistics itself suggests a strong correlation between increased social media spending and hyper business growth. Actually, the SMBs that have the greatest impact on the economy and job creation are those in growth mode, and those companies are most active on social media. 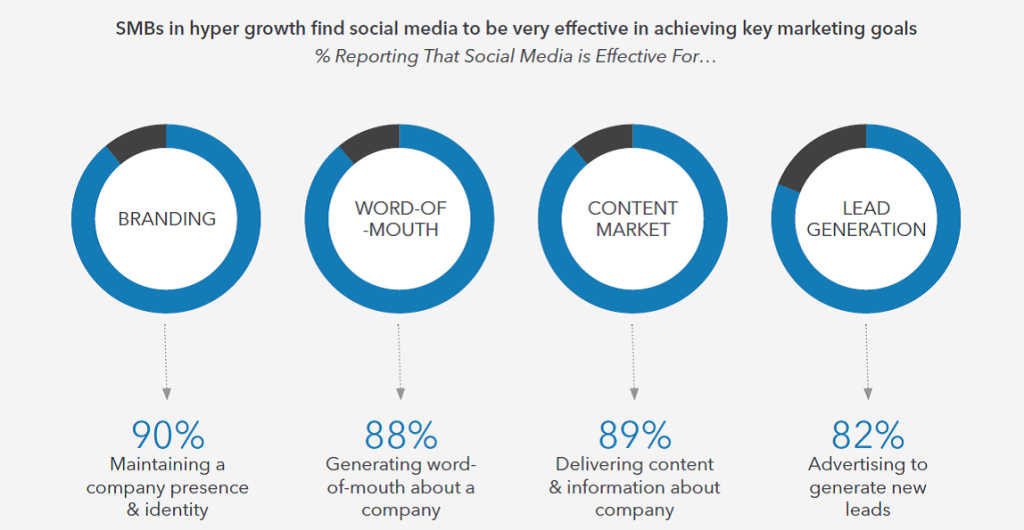 Talk of social media marketing and first few bouncing names that you would hear is of Facebook, Twitter, Instagram, Pinterest, and Youtube. In all those discussions the usability and utility of Linked-In hardly considered, as long as you aren’t talking to someone who actually understands social media. But, not any longer. As per the research report, only Linked-In provides SMBs with the 4Cs i.e. credibility, connection, context, and community. Refer to our “As-Is-To-Be” framework to realize how we have always focused on above strengths.

In a SMB value chain, Linked-In is a valuable tool for sourcing, open innovation, marketing & sales, and customer service activities.

It’s a globally accepted truth that the growth of any nation is highly dependent upon the growth of its SMB. Social media undoubtedly is a strong enabler and catalyst to fuel that growth. What differentiates a successful business from unsuccessful ones is the adaptation to and adoption of social media.

You can download the complete research report at Priming the economic engine. The image used are from the report itself and not the property of 366Pi.

Reach the author: The author of the blog could be contacted at Linked-In or reached at sushant@366pi.com. or feel free to leave your details in the form below- we will be happy to assist you with growth using Social Media for your SMB.